A day in the life of a stylist’s assistant pt.2

A day in the life of a stylist’s assistant pt.2

The ins and outs of our recent photoshoots: roof terrace shoot

With everything organised, props arranged, schedules drawn up, models sourced, team briefed and sun-dances complete, the day of our first photoshoot arrived which we approached with excitement and trepidation! As always, there were a few questions whirling around in my brain: would the weather hold up? Would we manage to get all the shots required done? Did I order enough food? Are the correct props coming to the correct shoot? Would the owners be lenient on us if we slightly overstayed our welcome? Would any of the models storm out in a rage a la Naomi Campbell? (probably less likely).

MORNING AND MINOR HITCHES
After having been concerned about the parking situation – 16 visitor parking spaces for a complex of 500 flats – I arrived to find that my colleague had easily found a spot to park his van containing the product we were shooting, the main event. First potential panic avoided! The flat we hired for the day was situated on the ninth floor so the next hour or so was spent assisting the warehouse team bringing furniture, props, plants, trees etc up in the lift, feeling thankful that this is the year I decided to do a bit more weight training at the gym and appreciating the effort the location owners had gone to in arranging for the lift to be covered with padding, very useful for resting ones head on whilst in transit, between lifting and lugging. Once all the props were safely delivered, my part time role as a stylist’s assistant began – with ironing! Luckily I was one of those children who actually asked to help out with the ironing – a habit which did not last long I must admit. Whilst models were arriving, the photography team were getting set up and the sun was slowly making an appearance, Ali and I busied ourselves with unpacking, sorting, cleaning props where necessary (I discovered that lighter fluid is remarkable at getting glue stains off glasses) and setting up the first shots, fuelled by the wonder that is diet coke.

The atmosphere on this, our first shoot was wonderful; the sun was out, the models were happy (no tantrums!) and we even had a make-up artist (who arrived armed with THREE suitcases full of make-up) making them look super glam. After a coffee run for eight coffees which I miraculously managed to get back to the building, up the padded lift and into the flat without spilling on anyone, anything or myself I might add, we were ready to take our first few shots.

FIRST SHOT
Everything went incredibly smoothly – Ali jumped onto the set here and there to make tiny adjustments to props which most people wouldn’t even notice; I decided to stay out of it and leave it to the professionals. Ali made the scene look beautiful and incredibly inviting. The models gaily laughed and drank their wine (prop wine aka non-alcoholic, although this didn’t seem to be a problem!) and occasionally had their faces touched up or hair pinned back by the make-up artist, eagerly attempting to make them look perfect, despite the wind’s sheer determination to undo her hard work. The shots came out brilliantly, everyone was happy and the models were temporarily released. 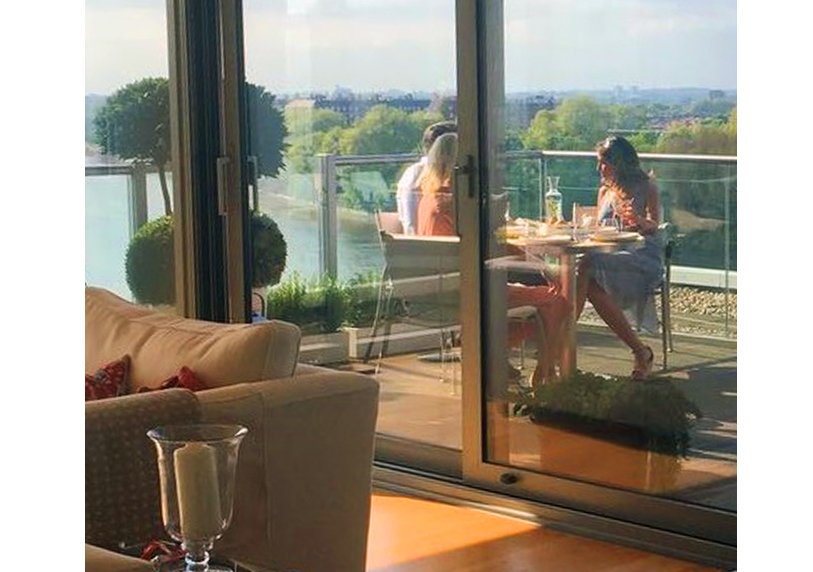 MID SHOOT LULL
My past experiences of photoshoots have involved a steadfast fight against time and daylight. On this shoot, however, we found ourselves with a rather spoiling lull for a few hours waiting for the sun to go down and the light to fade which was essential for our next few shots. The new range we were shooting is extremely versatile and the products have use both in the day, evening and night which needed to be reflected in the shots. It was now early evening but being spring/summer, it was bright light outside. The solution to kill an hour or so? Order a great big curry and tuck in! So we did and it was not only delicious but a great way to let everyone reflect on the afternoon and re-charge for the next task ahead.

EVENING BECOMES THE NIGHT
Before we knew it the light was fading and there was a quick dash to get everyone back into position. Ali had been working away making a few small adjustments to the table and adorning the faux laurel plants, faux buxus balls and indeed non faux plants with fairy lights, as well as lighting lanterns and candles to create a gorgeous midsummer glow. The light was really on our side and beautiful shots of the sun going down and the darker evening light with a subtle pinky/orange radiance were achieved. Despite it being mid May, it was really rather chilly once the sun had gone so I highly commend the models for their true British grit, smiling through the slightly bitter spring wind, reminding one that it is not quite summer….yet. Luckily regular glass top-ups (real prosecco this time) helped enormously!

THAT’S A WRAP
Once the shots were done, the models scuttled inside to warm up and the break down commenced. It was now a case of all hands on deck to remove and wrap all props, blow out candles, turn off lanterns and release the fairy lights. There was a lot of washing up, sweeping, mopping and general cleaning to be done and all at 9-10pm at night! The very kind and accommodating owners of the location allowed us to leave all the props in their kitchen to be collected first thing the next morning and Ali and I set about labelling everything to within an inch of its life to make sure nothing was left behind and that the warehouse team would know which items were needed for the next shoot and which ones could be put aside. It was no mean feat but by 10:30pm, we were finished – not before I discovered to my delight that the couple who owned the location were actually next door neighbours to my family when I was a baby – a reminder of how ridiculously small this world really is!

Like Christmas Day, after hours and hours of preparation, the shoot was over in a flash! I will say here and now that I am not much of a stylist but my ironing, washing-up, wrapping and weight lifting skills are definitely improving!