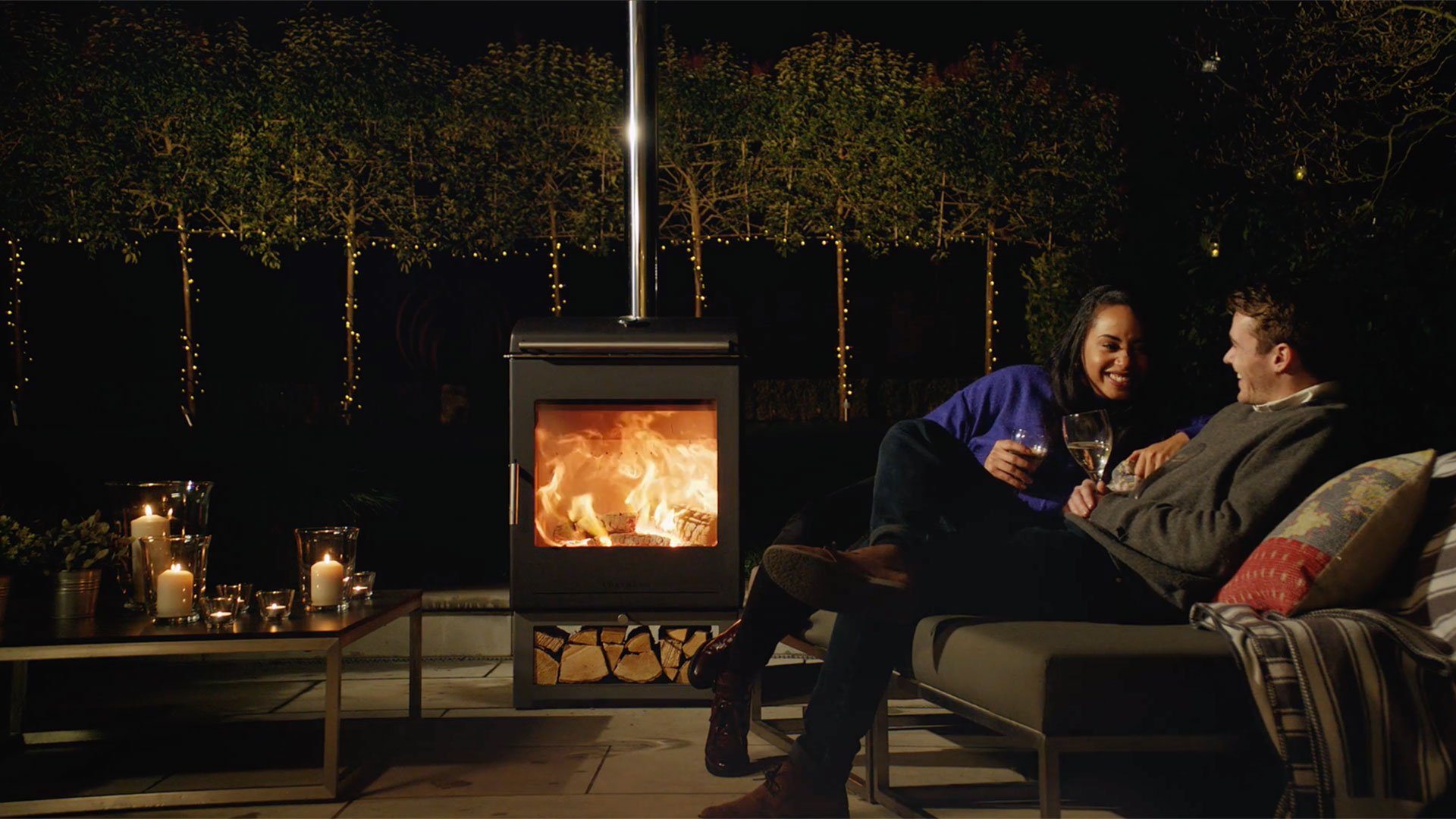 A day in the life of a stylist’s assistant pt.4

The ins and outs of our recent photoshoots: Country house shoot

With a brilliant weather forecast ahead of us and a well-organised team raring to go, all there was to do in advance of the next two-day shoot was to visit my mother’s lovely local butcher to buy a vast amount of meat, including a 4-Bone Rib Roast which is not something I have come across before I have to say, but it was very impressive! Then on to Majestic for the all-important wine supply and home to receive the Ocado delivery containing almost double than for the previous shoots. Finally the delivery of the props and BBQ/Outdoor Heaters and the scene was set for what was to be one of the most surreal feeling couple of days “in the office” I have ever had!

MINI HAMPTON COURT
The day started early with Ali arriving at the train station first thing wanting to get ahead in terms of organising the props and being prepared for the first shot – despite it being hours away, but time just seems to disappear on these shoots. Despite everyone else being scheduled to arrive at midday, they all decided to get ahead of the day as well and soon the drive was overflowing with cars and vans. In between making numerous cups of coffee and tea, finding ladders, unpacking and arranging props with Ali, as well as playing hostess to 15 or so colleagues, I did manage to catch a glimpse of what was going on in the garden as the first shot was being set up. The BBQ/Outdoor Heaters had been arranged amongst my mother’s topiary (mini Hampton Court I always call it!) and were being shot as they were with minimal styling and the house as a backdrop. I must say that I never imagined my old – very uneven – croquet lawn would be put to such good use! The sun had appeared from behind its bed of clouds and everyone commented on what a great day at the office it was turning out to be. 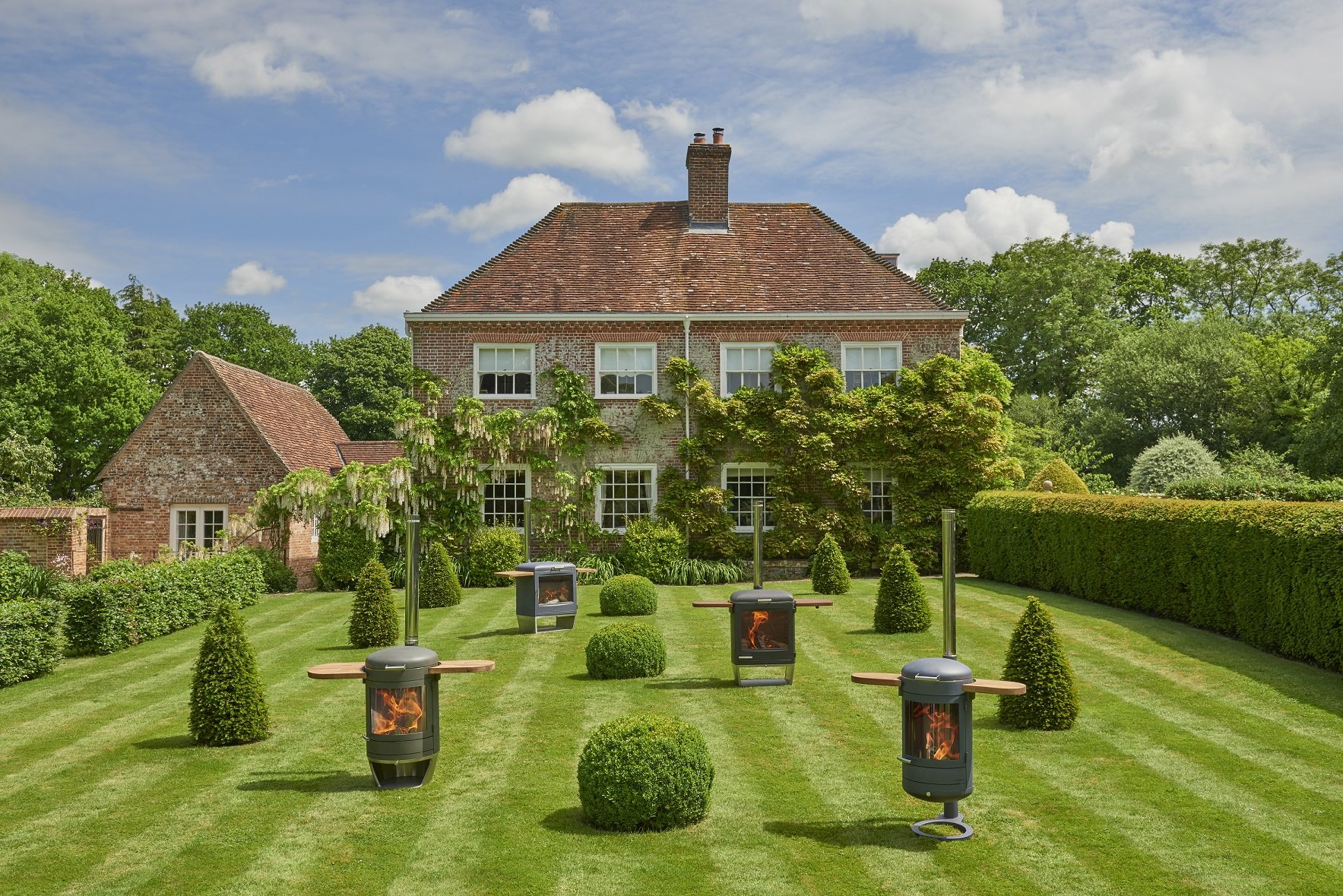 PUPPY LOVE
With so many shots to get done, we moved swiftly on to thinking about the next shot: an intimate dining scene under some trees – trees which I have to say in my 20 years of living at this house have never given a second thought to, but which were transformed by Ali’s impeccable styling and creativity. We spent some time hanging fairy lights from the branches, laying out different table setting options and of course deciding which food to place on the BBQ as well as the important questions of which wine to use. By this point the sun was shining down in all its glory and the light was stunning. The models were all ready, hair and make-up (done by themselves this time) and our photographer, Anthony, started doing what he does best. The shots came out really well and the models were kept happy with full glasses of real wine and delicious BBQ’d food which they were actually allowed to eat this time! Ali was constantly ready to jump into shot here and there to re-arrange props to make sure the scene looked the best it could. I was entrusted to find some secateurs as some minor pruning needed to be done to one of the trees (the application for full branch removal was denied, however!) I realised that whilst I was making teas/coffees, finding ladders and garden tools, helping Ali with props and generally running round the garden like a mad person, I had a little shadow following me around wherever I went: Peps, my black cocker spaniel, always loyal, always by my side and as it turns out a rather good model as well. He didn’t quite make the cut for this scene despite his impeccable posing, however I am pleased to say that he does feature in our campaign.

POOL PARTY
Two shots down and many more to go! There was no rest for the wicked – or so I thought. After spending an hour or so inside sorting, wrapping, un-packing props with Ali, I ventured outside to find the crew outside by the swimming pool, some gaily drinking G&Ts in the sun and indulging in Pringles and dip – a perfect summer’s afternoon. Some of our models were still on duty however, which included the gorgeous children from the previous shoot and were in the pool, by the pool, posing and chatting to create a wonderfully relaxed summer’s day scene with one of the BBQ’s in heating mode. It looked brilliant and my only wish was that I could jump into the inviting water as well as it was now very hot in the garden, however with two more shots to achieve during the evening there was of course work to be done in the stylist’s corner.

A PERFECT EVENING (MINUS THE SUNBURN….)
After a lull where we feasted on leftovers and waited for the sun to go down, Ali and I set about getting the area under the trees ready for the heating shot. With the lights just needing a slight adjustment and after just a few changes to the table setting, chairs and lanterns, the models took their seats again and the tranquil heating shots were taken. The light was fading fast but the blazing fire from the outdoor heater created a gorgeous glow and gave off an impressive amount of heat – no one complained about being cold – and the shots came out better than expected. With nothing or no-one needing my attention for a few minutes, I looked on at the scene in this quiet corner of my home which had been transformed into a blissful haven, with my trusty sidekick at my side. The last shot of the evening took place in the walled garden featuring two models relaxing on lounger chairs looking on at the smallest of the HEAT range enjoying the warmth of the flames and twinkling fairy lights as provided by Ali. She kindly let me off this one, so I enjoyed a glass of red wine with some colleagues, enjoying the fantastic heat of the fire (used in the previous shot) well into the late evening, reflecting on what a hugely successful first day it had been. It wasn’t until I went up to bed that I noticed that my arms – usually a rather pasty shade of white – were a very vibrant shade of beetroot due to my complete lack of suncream for the entirety of a very sunny day. Oh dear! 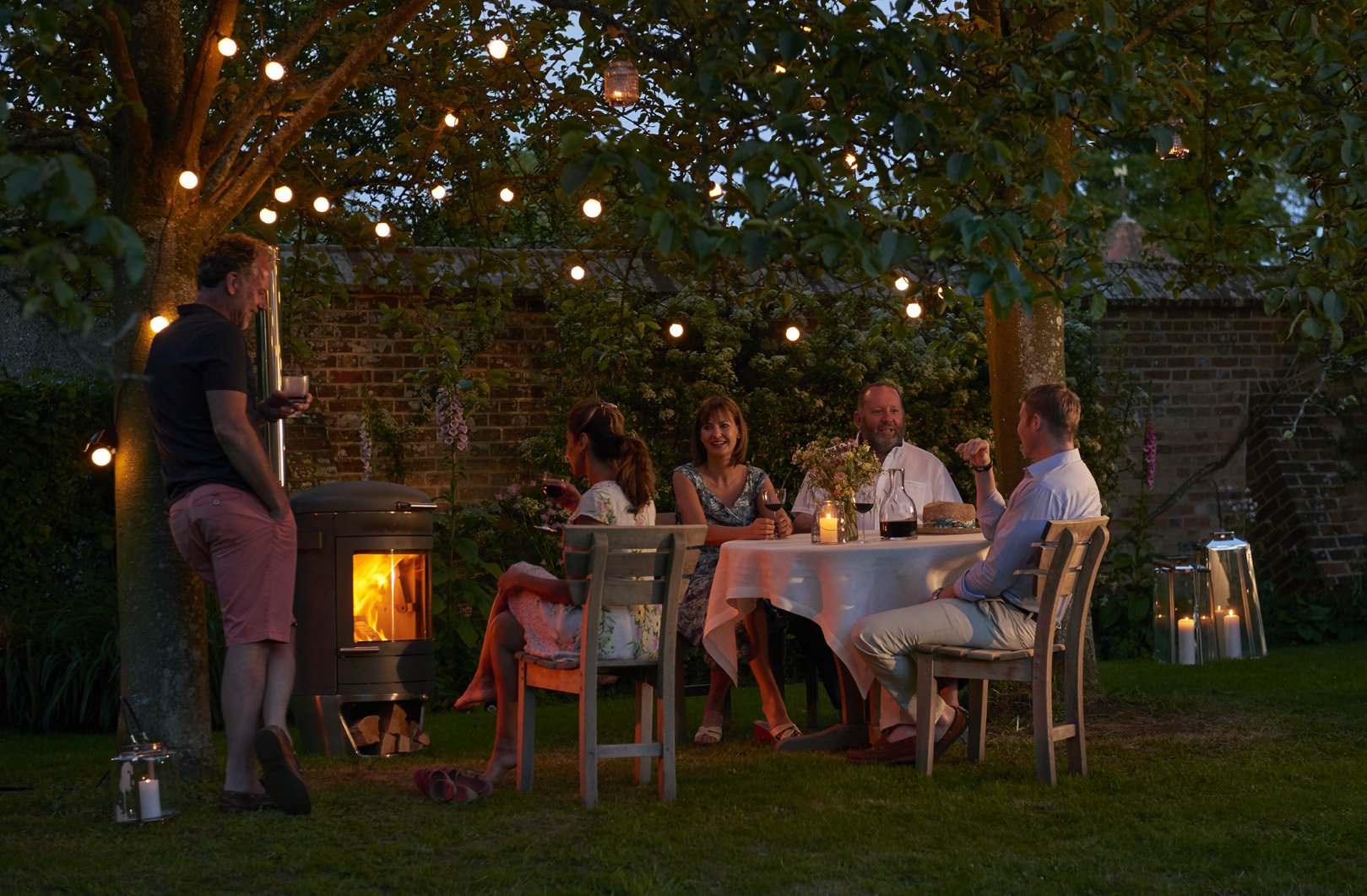 THE 4-BONE RIB ROAST AND A BIRTHDAY PARTY
Waking up that morning I immediately felt the weight of my heavily sunburnt arms and my immediate thought was that the best thing to do would be to hide inside all day. Slight hitch was that whilst I may have been at home, 15 or so colleagues would soon be descending! Dressed in a ridiculous cardigan which was almost totally see-through and therefore provided minimal protection from the sun’s pesky rays, I emerged excited for another day’s shoot with a few hours grace period until everyone arrived at noon. Time to have a leisurely breakfast, a lovely walk over the field with Peps and perhaps a quick swim? 9am – cars start to arrive, the coffee machine was warmed up and poor old Peps’ walk (and my swim) were delayed. Luckily my mother arrived mid-morning so he was taken care of. For me though it was back to assisting Ali for the big, main shot: the family scene in the walled garden.

With re-enforcements (in terms of extra models) due to arrive and the 4-Rib Roast being cooked in advance for four hours, it was going to be quite a party. We also discovered at about mid-day that it was one of the Chesneys team’s birthday (which had been kept very quiet) so a cake had been hidden in the garden – miraculously it was not found by Peps! After attempting the task of ironing perhaps the largest tablecloth in history with the assistance of a clothes rail, Ali and I set about getting the table ready. With so many hands on deck it didn’t take too long to move all the props into the walled garden and the final result was as expected, stunning. Ali outdid herself. The table looked incredibly inviting, the rib roast was looking succulent and juicy and we just managed to miss the scheduled rain shower in time to get some fun and very natural looking shots. An extra female model was needed so I raced upstairs and donned my gladrags for the shots – facing away from the camera this time, so I could munch and drink to my heart’s content! The cake made an appearance (M&S Colin The Caterpillar, the best) and everyone sang, it felt like a chilled Sunday lunch. The rest of the afternoon was spent packing up most of the props which Ali no longer needed as the final shot was the evening version of the party in the walled garden. It was a small intimate affair with only a few people and again I was cast last minute, however my little canine friend was by my side and features in the shots with us, plus there was cheese. Lots of cheese! 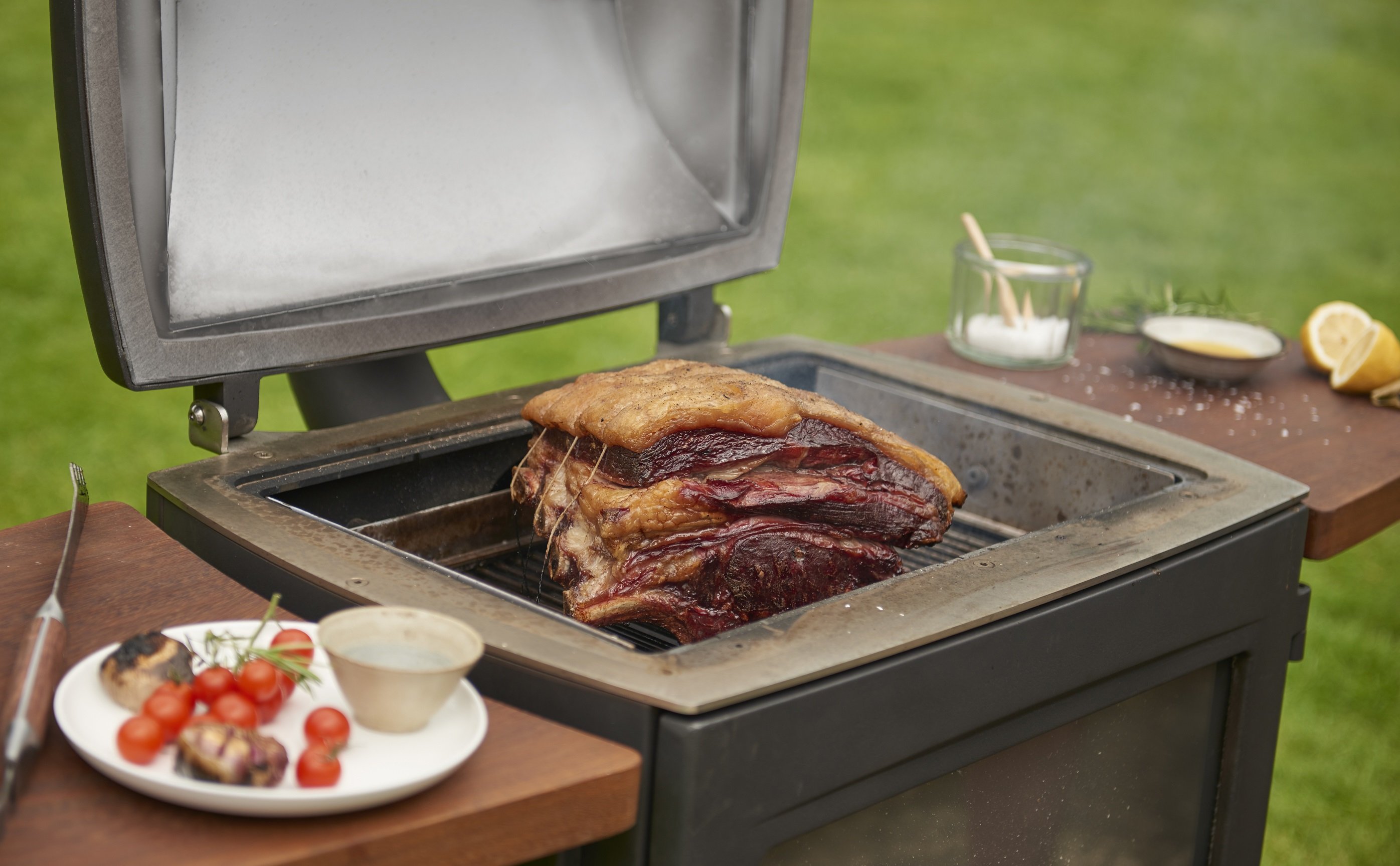 FINAL WRAPPING, PACKING AND RECYCLING
Once the final shots were done, the crew departed and Ali and I worked into the late evening sorting, wrapping, packing, labelling and organising before finally calling it a night and vowing to get up early the next morning to finish. The next morning after some strong coffee curtesy of my father – the coffee king – we continued to pack, wrap, label and then Ali got her train home and I spent the rest of the morning sorting – not props… but rubbish and recycling, helped of course, by Peps.

I should mention that as well as our brilliant photographer, Anthony, we also had a very talented videographer, Chris Searson, with us for the two days which can be viewed below. It is quite remarkable what he put together from filming us all for two days straight and capturing the best moments.

I felt very proud after the shoot was over. It was really special seeing parts of the garden really come to life with these beautiful and very clever new products. Seeing the HEAT collection at work, made me realise that we don’t need one… we need four!! One for every scene that we shot them in.

Huge thanks to all the below companies who kindly lent us their products for to help style all our shoots, we are truly grateful.